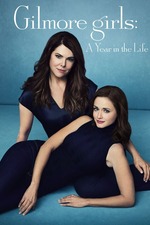 This reunion miniseries is about as up and down as the series was, with the same breathlessly familiar narrative voice speaking through all the characters, and for me, a fan of the series, that's totally ok. I dug the usual raft of <UPDATED!> pop-cultural references and cameos (Alex Kingston! Paul Anka! Jason Mantzoukas! Roy Choi! Bonita Friedericy!), including the Clouds of Sils Maria evoking pairings of Lauren Graham and Alexis Bledel with their younger Bunheads counterparts Sutton Foster and Julia Goldani Telles. So yeah, plenty of fun within but I'd also be pretty happy to leave it here.

Top moments for me from each season-themed episode:

Spring
Paris's entire Chilton sequence, with the highlight being her ongoing grilling of Headmaster Charleston re the school's spend of her hefty donations.
a second film by kirk playing as curtain-raiser to David Lynch's Eraserhead, introduced by Kirk dressed as Henry Spencer from Eraserhead.