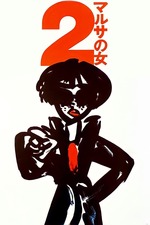 A lot of the bite that was present in the preceding film feels missing here. But I guess that as long as Juzo Itami makes the most of Nobuko Miyamoto (as he's done in everything that I've seen him direct her in), then it'll always keep me enjoying his work.

So much of what made the first film fun still remains intact though. If the film were more of that and less an incredibly grim venture into the world of a tax inspector, maybe it'd have been every bit as great as the last. But those bits that are fun are delightful.

I miss that theme though.