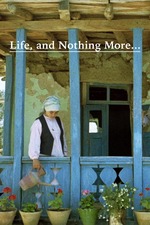 Life, and Nothing More...

Feels very introspective - which is one among many things I can come to expect from Abbas Kiarostami, but it's also incredibly heartfelt. This fiction-documentary hybrid shows an experience that Kiarostami himself had lived through, searching for the stars of his film Where is the Friend's Home? after an earthquake had devastated Iran in 1990.

But as he develops this into what would be the second film in what we know now as his Koker trilogy, Kiarostami captures a certain resilience that people still feel from how we try our best to move forward in our lives. There's a sadness being suppressed, but Kiarostami also plays everything so hopefully, as this town we're seeing continues to rebuild for the inevitable future.