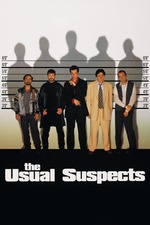 Man this one really let me down, as the reputation and the premise really drew me in but I felt so disappointed from it. But it wasn't all bad.

The main problem I had with this movie was the lack of a clearly defined plot progression and act changes. I just felt like this movie went from one scene to the next and acting as if the last one never happened or had no effect on it. It's hard to discuss this movie since it has one of the most blunt twists, but even without spoiling it still dragged on for me.

The characters, besides Verbal, were not good in my opinion. You have generic cop, generic pothead, generic thug, generic Italian mobster I mean what else could you want. I think Spacey was really able to shine with a "just okay" performance because the other actors just weren't that good.

While watching, I kept thinking to myself that this movie was meant to be a short film about the Keyser twist. I mean let's be real this movie was probably thought up around the plot twist and was worked on from there. This film just felt like it was 90% filler and based around a generic drug heist with this mysterious aura of Keyser pulling the strings until the last scene where everything interesting happens. I was hooked for the first 5 minutes and the last 20 minutes but the middle hour was just so dull.

All in all, this movie gets a 4/10 because it gave me the most generic criminal movie and didn't even blow my socks off at the end with the twist. Sure, the idea was nice and the twist was actually pretty decent if not completely over-hyped. I wish I could say I liked it and maybe one day I'll come back to it but for now I gotta admit it was quite the disappointment.