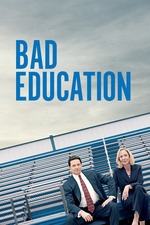 After Thoroughbreds came out a couple years back, I was keeping a strong eye out for anything Cory Finley came out with next. To back that up, I was watching the release date of this film like a hawk. I’m so glad I did, because Bad Education is absolutely excellent and my kind of movie down to the bone.

The film follows the biggest public-school embezzlement scam in American history that took place in Long Island. The film unfolds its mystery and eventual crime so damn well and I was constantly sitting forward in my seat needing to know what happens next. The direction isn’t as flashy as Thoroughbreds was, but it’s as sharp and present. While it isn’t written by Finley, writer Mike Makowsky develops such a real and fascinating world, illustrating what people can do when they want it all, thinking they will receive no consequences. It’s such a deeply resonant theme, portrayed it both black comedy and harsh reality.

It goes without saying that the performances are excellent, especially Hugh Jackman and Allison Janney who just capture these characters so well, I absolutely forgot I was watching them. Jackman has a scene in his office with a kid that it just brilliant; I was glued to the screen.

I loved this. It’s one of the more fresh crime films I’ve seen in a long while, covering a topic that’s both insane and quite plausible at the same time. It’s on HBO now and if you’re looking for a good crime story, this is definitely one of them. God I loved this, wow.