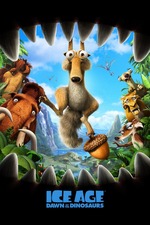 Ice Age: Dawn of the Dinosaurs

The three film of the ice age franchise it is another fun animation film. As we see Ellie and Manfred having a baby and Sid wants to have his own responsibilities in looking after a child, he finds three eggs that soon crack and the Dinosaur’s mum is looking to find her eggs, but Sid doesn’t want to give them up and so he is taken with the baby dinosaurs together with mummy dinosaur. The plot of the film is seeing the gang of Ellie, Manfred, Diego, Eddie and Crash as they go on a wild dangerous journey to find Sid. On this journey we see a new likeable character called Buck, who has an eye path and is voiced amazingly well by the funny comedic Simon Pegg. There is some amazing adult/ parent comedy in there with some nice references, and talking about new trends at the time, eg: vegan diets. We also experience a solid side story with Diego and his experiences of been close with his pact and losing his typical wildlife tiger he once had. Sid also becomes a very popular member of the dinosaur family in the end, as he becomes liked by all and it’s very fun and happy to see. We see more appearances from Scratch and Scartchette in this movie too, which I don’t mind, they did have a few funny lines and scenes, which I enjoyed; so they did a solid job. They also have very funny and crazy stories to tell.

Overall, I would review this film 3.5/5⭐️ as I thought there was some great stories about friendship and teamwork. I preferred this film to the first one and I think I just like it as much as the 2nd for me. My favourite moment from this film was definitely the scene with our characters going into some laughing gas and the characters going crazy and performing loads of strange laughs and high pitch voices. It was really enjoyable and hilarious to watch. I think this film is a brilliant family film, as there in loads of kid references but some amazing fun adult jokes too. It’s a very entertaining animation film for me. I would recommend the watch; if you have been watching the other ice age films.

The Hobbit: An Unexpected Journey