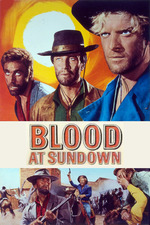 Alberto Cardone's second Western direction follows the theme of naming his films with roulette terms (his first movie was "Seven Dollars on the Red"), though the movies aren't intended to form a series of films in any way. Still, both deal very much with the concept of family and both feature Biblical quotes pertaining to the perception of familial bonds that act as forewarnings for tragedies to come. Johnny Liston (Anthony Steffen) returns home after spending 12 years in prison for a murder he didn't commit. In the meanwhile, his brother Sartana (Gianni Garko) has become the ruthless leader of a gang extorting protection money from several surrounding towns, which lands him at loggerheads with Johnny not approving such conduct, nor his savage ways of mistreating and murdering people.

Thus he decides to become Sartana's opposition, though brotherly bonds are not so easy to break, particularly when under the embittered eyes of their old mother (Carla Calò). Whereas Cardone's previous Western was about a man's search for revenge that culminated in him having to face his own son in combat, here the movie pits literal brother against brother with both exhibiting divergent viewpoints on their lives. Johnny is the decent one of the family who just wants to get back to his life after his false sentence, the real details of which he learns as the movie goes on, while Sartana has fully embraced the sadism of a Wild West gangster with no compulsions on anyone's life other than maybe his brother's.

These two, however, are very much governed by the consideration they have for their mother, once a servant, but now having installed herself as a vengeful matriarch nobody dares disrespect – albeit her perception of Sartana's strength in making him a powerful "general" is equally blinded by her own hate that steers her to not see him being just a killer driven by simple violence. This familial core is what drives the movie's engine forward, around which various other satellites revolve, including a traumatised mute Sartana wantonly beats on, a woman still suffering from the murder of her father Johnny was sentenced for, and a shifty judge who isn't as above board as he pretends to be.

All in all, this is an entertaining Western, if not very intricately plotted, and makes for a perfectly decent sit even if it doesn’t exactly rise to any higher spheres. Garko would later go on to play another character named Sartana, launching an entire series of films starring that character, but which have no relation to this early career highlight. Aka. "Blood at Sundown," not to be confused with the 1965 film "Why Go On Killing?"