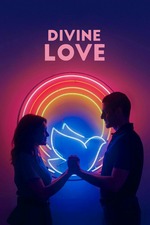 The year is 2027. Brasil has been overtaken by the Evangelical church and Carnaval is no longer the biggest party of Brazil. It has been replaced by a new one, called Supreme Love, that has the format of a gigantic Christian rave party where people attempt to get closer to God through the transcendental electronic music. In this new Brazil, marriage and family are the center of society. Everything revolves around having (legitimate) children. At the entrance of every building, instead of a metal detector, there's a pregnancy detector. Religion has also become sort of a fast-food product, with "Drive-thru" churches being found all over the country. We follow Joana, a deeply religious woman who works in a notary's office taking care of the paperwork for "mutual divorces", while she tries to prevent couples from continuing with their divorces. She is a staunch believer in bureaucracy - almost religiously. For her, bureaucracy means equality. She is a proud member of the Divine Love Church, a new kind of Evangelical Church that bases itself in reaching God through the consummation of love. However, something is amiss and she can't figure out what it is. She and her husband, Danilo, can't conceive a baby, despite everything she does to serve God.
Divine Love is a very unique film. It's a dystopia, but it's not like any other we have seen before. Where most dystopic films are filled with bleak visuals, Divine Love is a delicious feast of lush neon imagery. It's impossible not to be overwhelming by the beauty of this film. Every single frame is so beautifully constructed that it's almost unbelievable. Gabriel Mascaro does an incredible job directing what is probably the most visually striking film of the year. He invites us into a beautiful world that is, nonetheless, unsettling. It's unsettling because instead of seeing it through the eyes of a rebel, we see it through the eyes of a conformist - someone who truly believes in what she is told by this religious state. And that makes this film all the more impactful. We are invited to understand this woman who has a true sense of faith and feel heartbroken as she is manipulated by people she trusts with all her heart. Dira Paes portrays her with such heartbreaking nuance that it's impossible not to be mindblown by her performance. She portrays the feeling of confusion and inner struggle inside Joana. It's truly one of the greatest performances I have ever seen. It's incredible to watch the journey that this woman goes through. Divine Love, deep down is a journey of faith and love and the resilience of a true believer, without any judgement to it's subject matter. I, as an agnostic, was very impressed with the way this film deals with the issue of faith and its questioning. It doesn't preach and I wouldn't consider it a religious film either. It's just a film about someone who truly believes in God with all her heart and we are invited to understand her. What it is is an extremely intelligent critique to the religious institution, mainly the Evangelical church, that dominates Brazil nowadays, and the far-right that is allied to this institution in Brazil - materialised by Bolsonaro. It's possible to find numerous parallelisms between this dystopia and the ideology of Bolsonaro and his party. Even though it's never blatantly said, it's clear that things like homosexuality and abortion are illegal in this society. And that is what makes this film such an unsettling experience. How real it feels in the reality of modern Brazil. It is important to note and warn that, as one of the main subject matters of this film is love, there is a lot of (I think) unsimulated lovemaking in the film - so if you are sensitive to this, this is your warning. There is also a particular scene that might be also disturbing that involves the birth of a baby. All in all, this is both a beautiful and an unsettling analysis of faith and the current reality of Brazil (and, to a certain extent, the world) through a brilliantly crafted lush neon dystopia filled with shades of purple, blue and red. It's truly a beauty to behold but also a film that will leave you lost deep in thought, and I highly recommend this fresh take on the dystopic genre to everyone.