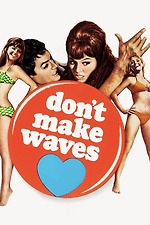 When 5 minutes in Tony Curtis is down to his undies, you know you're up for an interesting time 😂 In this sex comedy that couldn't be more 60's than it Extreme is, we follow Carlo Cofield, a New York tourist in California, who in the first day on the West coast finds himself being sucked into the world of crazy rich people and unconstrained sex - it's the 60s alright, and intoxicated love is in the air. Carlo meets a beautiful Italian actress-hopeful who takes him in her house after an accident and he finds himself dragged into a web of affairs, while he falls for a beautiful girl who rescues him from drowning on the beach who is a skydiver (for some reason?). This film has such a crackhead energy that, despite having one of the most nonsensical plots I have ever seen and being outright bad, it's a wild and surprisingly hilarious ride. The insanely otherworldly and snappy dialogue was enough to keep me in stitches throughout, and the ridiculous situations that we witness make this truly a so-bad-that-it's-good film. The dialogue is so ridiculous that it ends up being memorable, with lines such as "what are you doing in my bed? You rapist!" and ""where is the... What do you call the animal? The zigzag horse? Ah, zebra" being uttered by actual humans. It's also such a straight male fantasy, with the female characters just being there to be dumb and sexy. The acting is also not exactly the most exceptional, but the film is so wacky in general that they work extremely well. Claudia Cardinale was honestly the best part of the whole movie, with the natural way that she delivers her nonsensical lines (the ones I quoted above are said by her character) making them even more priceless. She kept making me laugh out loud with the tone she delivered her horrible lines, which may just be a stroke of acting genius. Sharon Tate was just there for the camera to drool over, with her character being one of the most paper thin characters I have ever seen, playing a hot girl who is a skydiver for some wild reason that was too beyond me to understand, with her only personality being that she's sexy and Tony Curtis falls madly in love with her after being pulled out of the water by her and her ass being the first thing he sees. All in all, Don't Make Waves is as cheesy and sleazy as 60's sex comedies can go, but it's nonetheless extremely enjoyable if you are looking for something to watch while you turn your brain off.