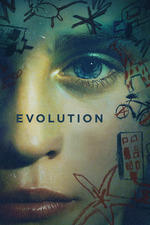 An island in the middle of the sea, a black rock in an immense blue. On the island, only women and boys inhabit it. Women wearing dull dresses. Boys who are subjected to a strange daily routine. Where did the women come from? Where are the men? A haze of mystery envelopes this island. One day, Nicholas, one of the young boys, is swimming in the pristine waters of the sea around the vulcanic island. He spots a red starfish in the seafloor. He swims to it. But what he finds is a terrorising sight - a decomposed boy, his eyeballs taken from their sockets, the intensely beautiful crimson starfish clinging to his belly. It's a terrifying sight, and it's one that changes everything about how Nicholas sees the place where he lives. Who is this boy? Is this island all there is? What do the women do at night? Are they to be trusted? What do they hide? Is his mother truly his mother? A blue pristine extends around the island, but a murky sea of mystery inundates the island on every small dark corner. A pristine and threatening beauty coats this incredibly gorgeous film, and Lucille Hadzihalilovic perfectly builds an atmosphere of disturbing mystery that sticks to us, haunting our minds through an insidious manipulation of our imagination. Evolution isn't a film easy to classify, but I would say that, deep at it's distorted dark heart, this is a coming-of-age story. It's the story of a boy defying authority, realizing that he cannot trust it anymore. This authority is embodied by the strange women that populate the island and at the beginning we assume are the mother's of these boys that play in the black beaches. However as the story progresses, we start to see glimpses that thicken the disturbing nature of this island. However, Lucille Hadzihalilovic brilliantly plays with our minds, showing shadowy glimpses of the sinister conspiracy that is hidden by the women, but every time she does so she adds more questions into our minds, always refusing to give us easy answers about what is going on. As the film progresses, we delve more and more into the murky waters of this nightmarish world, as the film becomes more and more flat out insane and twisted. More and more body horror sips into the scream, but never enough to be either too repulsive or too meek, always skimming this fine line, intensifying the terrifying atmosphere of the film. The brilliance of this film is how Hadzihalilovic obscures our sight, making us truly enter the mind of Nicholas, who is as lost as us. We never know more or less than the boy, and that intensifies how terrifying this film is without any need for a classic jump scare. There is constantly a threatening presence in what we do not know or we don't understand, perfectly portraying the terrifying experience of Nicholas. In a way, this film is about how terrifying the unknown world of the adults is to a child. It's about a child who refuses to remain in ignorance of this world, transgressing the border of the innocent world of childhood into the dark world of adulthood. Deep down, that is what happens to us in our adolescence - we go from a worldview of innocence to facing the harsh reality. It's a story about a boy facing disillusionment, coming-of-age, slowly understanding the reality around him in a different light. This is a gorgeous film, with every shot having such a vitreous beauty that is truly breathtaking. The beauty of the black volcanic rock that composes this island and the contrasting bright colours of the sea and the sea life are brilliant subverted to both seduce us into this film and its story and create a sense of dread that permeates every image. Max Brebant plays Nicholas, and he does one of the best child performances I have ever seen, making us truly empathize with his vulnerable position, many times giving the impression of being a lobster out of its shell, growing to build a new one but in that crucial phase of vulnerability where every cut will make a permanent scar. This is a film that strives with the frustration of the viewer, and it delves into the most obscure kind of horror, and so, this is most definitely a horror film not for everyone. It's slow and quiet, yet it's pace and every little sound is perfectly used to craft a terrifying story that disturbs us to our cores. It has some quite disturbing body horror images, some of them involving children, so it is definitely not advised for people who might be sensitive to this kind of imagery, however, this body horror is never gratuitous or out of place, always being used for a very precise reason. This is a film that holds a deep aqueous beauty, and through that Lucille Hadzihalilovic constructs a deeply disturbing horror that becomes an extremely thought-provoking experience, bringing a unique coming-of-age story to the screen. It's beauty with rotten core, a beauty that seduces us, calling us to it, but then revealing itself to be the most voracious beast of horror that latches itself onto our psyche, polluting it with the most unsettling feeling of disturbance, becoming one of the most fascinating horror films of our time.