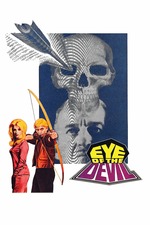 Eye of the Devil

A wealthy marquis is living a fairly normal life with his family in Paris until he receives an ominous message from a man from his castle, Bellenac. He must return to it, but he tells his wife Catherine to remain in Paris with their children. Against his orders, she drives to the castle and soon discovers that something is amiss. Two mysterious icy blonde siblings, a family secret, an old pagan cult hidden from the rest of the world. A precursor to Robin Hardy's pagan horror masterpiece, The Wicker Man, this film is an interesting watch in the way it explores the genre. However, in nearly every other aspect it falls completely flat. The film starts with a dizzyingly hypnotising montage of disorienting and disturbing images that look like something straight out of an experimental film and creates an ominous feeling that captivates us and promises an eery journey. But this couldn't have been an emptier promise, because, after that, the film just goes downhill. Although having a gorgeous gothic cinematography and a few moments that hint at a truly creepy atmosphere, this is completely countered by stiff and uninteresting performances that simply made me unable to care about whatever was happening and the horror that was ensuing. Not only that, but the biggest problem that I had with the film is the editing, which is Bohemian Rhapsody levels of all over the place. I think the atrocious editing singlehandedly destroyed whatever faint mist of creepiness present in the atmosphere surrounding this story, making it more laughable than scary. There are many times when we see images that could amount to something dizzyingly eerie, with creative camera movements and angles, and that eeriness is immediately cut off by some horrible cut to something completely unnecessary and random. Apart from the cinematography and these small islets of interesting moments, the only thing that stood out in this film was Sharon Tate, and I'm not saying this just because it's Sharon Tate. In fact, most of those small moments that possess a small ominous atmosphere are thanks to her chilling performance. She plays one half of a creepy sibling duo, Odile de Caray, with the other half, Christian de Caray, being played by David Hemmings. As Odile, she brilliantly uses her beauty to strike terror into us through an icy creepiness present in her unflickering gaze, truly showing a promising talent. While the rest of the performances are mostly uninteresting, even though the cast is absolutely stellar (David Niven, Deborah Kerr and Donald Pleasance), Tate shines in her role as a bloodcurdling and mysterious icy blonde. Eye of the Devil is an extremely uneven film, with J. Lee Thompson promising many times an interesting directing, although completely falling flat in the next moment. It tries to be scary but it's creepy at best (and only at times). Nonetheless, it manages to be an interesting watch if you are watching for Sharon Tate, because she's honestly the only reason I would recommend this film. Truly, if this was just a two-hour long close-up of Tate being absolutely gorgeous, this would have been a much more interesting experience.