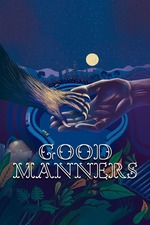 Once upon a time there was a girl, daughter of a wealthy landowner. On a night of full moon, she met a mysterious man, who she felt madly seduced by. They went to the top of a hill and united their bodies in passion. However, something dark resided deep inside this man. When she woke up in the middle of the night, she did not see the man she had slept with, she saw a terrifying beast. She grabbed a gun and she shot the beast and it fled into the jungle. She never saw the man again, even though she tried to find him after she found out she had gotten pregnant. Her family, outraged by her unholy affair, sent her far away into the big city into a big luscious apartment. She awaits the birth of this child, who seems to grow more ravenous every day inside her belly. "He has a big nose! He has a big mouth! He has big hands!", the doctor says, a strong boy the child will be. The woman, who is called Ana, hires a maid, Clara, to help her out with the house chores. They start to develop a strong bond between each other, that becomes more than just a bond - it becomes something deeper. However, Clara notices something strange in Ana - every full moon, she has sleepwalking episodes, in a beastly search for flesh. What is this child growing inside her womb? What is he doing to his mother? In a fateful night, all questions are answered, and Clara's life won't ever be the same. In this fairy-tale-like horror story, Marco Dutra and Juliana Rojas tell us a surprisingly moving story about motherhood, coming-of-age and even class divisions. Mixing genres from queer romance to musical, this is an idiosyncratic film in the way that only Brazilians can make, a perfectly brewed potion of all kinds of herbs, mixed together to form a deliciously campy elixir that is as entertaining as it is thought-provoking. Beautifully shot, this film is given a classical look that makes this film delightfully subversive. In the first part of the film we follow the story from the point of Clara, and we witness a sort of campier and more tragic Rosemary's Baby, focusing on the issues related to pregnancy-related anxiety. With the second part, there is a narrative shift from Clara to the child that is birthed by Ana, Joel, in a story that becomes more of a coming-of-age werewolf horror. The issue that permeates both parts of the film, however, is motherhood, and more precisely single motherhood and what a mother would do for her child, which makes this an original take on it. A very refreshing aspect of this film is how it revolves around a lesbian relationship, adding a queer layer to this film that makes it more unique. Beautifully shot, with many times the screen almost seeming like a painting, this is a gem of horror that deserves to be recognized. Isabél Zuaa does a great performance as Clara, and so does Marjorie Estiano as Ana. Miguel Lobo also does a fairly good performance as Joel - his name is kind of ironic, lobo means wolf in Portuguese. All in all, Good Manners is a multilayered film that mixes various genres to bring to us a beautiful story of motherhood and love, with Marco Dutra and Juliana Rojas brilliantly twisting all these aspects together into a delicious tale of werewolves and lesbians.