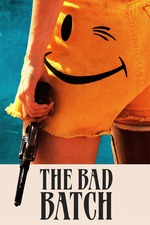 The near future. A new system has taken control of America, where undesirables are thrown out of the country, tossed to be forgotten and tossed to die. Anyone who doesn't go according to the system is to be thrown out, so as to only keep those who comply. Those who aren't desired by the state find themselves in a desolate harsh desert. The only law that is in vigor there is the most basic of laws - the survival of the fittest. A society of cannibals. A society of hedonists. A parallel world of madness. That's where Arlen finds herself. She walks through the deserted landscape, a defenseless prey, only to be kidnapped by cannibals - the survival of the fittest. Her limbs are cut out, she is made incomplete. She manages to find a way to escape through her wit and kills one of the cannibals - the survival of the fittest. She finds a new society called Comfort, one where everyone worships a dream, even though there isn't really anything to dream about. In this world of undesirables there doesn't seem to be anything that grows - but maybe something will manage to sprout and develop. Through a bleak dystopian landscape, Ana Lily Amirpour envelops us in the madness she creates through a strange sheer beauty that is ever present in her eye. Every frame is carefully constructed to dazzle and hypnotize us into the world that she builds and into the journey of insanity, revenge and an unlikely love that her heroine goes through. In a way that is both illusive and very on the nose, Amirpour constructs a world of dreams and vices that reflects modern American society. Survival of the fittest is the law that is upheld in this dystopia, and survival of the fittest is the law that is upheld in our capitalist society. Although flawed (and I'll get to these flaws in a bit), Amirpour crafts an imaginative and effective allegory that is both distant from us and very close. We observe a society of people who live in a harsh and unforgiving land who live to forget where they are and who endlessly seek a dream that is fed to them by a man who preaches to them about a dream that is as unclear as it is unreachable, all while he lives with the utmost luxury surrounded by an army of pregnant women. The interesting thing about Arlen is that she is both an undesirable in the law-abiding America and in this dystopian desert prison. She is an outsider, no matter where she finds herself in. Amirpour brilliantly subverts her character, making her a Mad Max-esque one, spinning our expectations for this male-dominated genre. Arlen is fierce and a bit insane and she gets what she wants. When a romance blossoms between her and Miami Man, a Cuban immigrant who has turned into a cannibal in this dystopian prison, muscled and masculine yet sensitive and fragile, she doesn't put herself in a submissive position, imposing herself. In both these characters Amirpour subverts what we have come to expect from the genre, putting the manly male character in the role of what we would expect of a female character and putting the female character in the role of what we would expect of a male character, switching our perspectives aggressively - maybe the reason why this film received such a mixed reception. In a way, Arlen has a masculine vibe to her, in the brutal way she handles herself, while Miami Man has a feminine vibe to her, in the tender way he handles himself despite of his physical appearance. Despite having these interesting gender-bending innovations, The Bad Batch does have some very noticeable flaws. While Amirpour masterfully constructs this dystopia and dazzles us with gorgeous visuals, her storytelling lacks a bit as she spreads this story thin in a very slow pace that seemed to show more gaps than depth. Another flaw is in the acting. Although both Suki Waterhouse and Jason Momoa presenting nuanced performances in their quiet moments (which fortunately are most of the film), once they open their mouths there is a jarring flaw both in their painfully fake accents and their delivery, which is a bit lacking. Even Keanu Reeves, who plays the preacher in Comfort, comes across as a bit stiff. An ambitious sophomore project, Amirpour stumbles a bit in delivering a fully cohesive and meaningful story, but is still able to grasp us with a terrifying dystopian world that very much reflects our reality, being able to bend our expectations and effectively create a fascinating world that leaves more questions than answers in us.

Man with a Movie Camera

Eye of the Devil