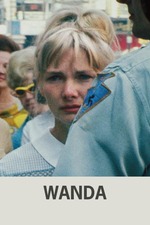 "If you don't want anything you won't have anything, and if you don't have anything, you're as good as dead."
.
A coal mine. The sun rises. The noises of machines fill the air. In a small house nearby, a woman awakens to the deafening sound of the machines outside and babies crying. Imprisoned in the confines of matrimony, messy hair covering her face. She awakens, but she would rather go to sleep. Sleep forever, in a land far away from this reality. She can't go on leaving like this. She must get out. She drifts in a black landscape, a ghostly white figure, looking for something - something that will bring some feeling to her life. She abandons her family and sleeps with random men, drifting from one to the other, indifferently. She walks, she drifts, she survives. She eventually finds Dennis, a petty thief, as he is stealing from a local bar. She doesn't care about him or what he is doing, she just goes along with the moment - for her, there is no past and no future, only a never-ending present. And so she goes along with this man, this thief who she just met. He orders her to do things, and she accepts. He beats her, and she accepts. He changes her, and she accepts. For she does not care. The beatings of life have desensitized her. She does not care about what she is or what she has. She doesn't even care if she's a citizen of the US. She's a spectre of a woman. A mystery. And as we watch her drifting through life, we ask ourselves: who is Wanda? With a raw and harrowing vision, Barbara Loden portrays the life of a broken woman in a male-dominated society, creating a true feminist anti-heroine that is both heartbreaking and fascinating. We follow her, a messy haired blank page, and we try to solve the puzzle that is her, in a truly gripping character study. We are submersed in the unpolished reality of the life of this working-class woman and we are hypnotized by her presence. The fascinating thing about her is her passive yet unsubmissive behaviour. She's a true drifter, indifferent to the beatings that she receives, but she never submits herself to anyone, remaining untamed, despite the efforts of the men that she comes across. Loden subtly and delicately makes us have empathy for her, even when she does questionable actions, and she slowly unveils an understanding in us towards her character. Although never explicitly revealing it, Loden unflinchingly makes us realize the abuse that this woman has faced and why she has become so lost and indifferent. In the end, this is a story about an inglorious Bonnie & Clyde, with no romance, glorification or glamour, just the harsh reality of violence and abuse, from an unapologetically female perspective. It's a story about drifters, lost in a world where if you don't own anything, you might as well be dead, just looking for someone or something, a connection that will make them feel again. Barbara Loden absolutely shines as both the director and the lead actress of this audaciously anticlimactic journey through a bleak and hopeless America. Through her indifferent look, she engraves herself in our minds with a subtle performance that holds an immense emotional depth, with her connection to Wanda being very clear, as this could be considered as a semi-autobiographic film. Michael Higgins also does an exceptional performance as Dennis, portraying perfectly the hidden fragility in his character's outward toxic masculinity. Wanda is a fascinating character study that brilliantly reflects the reality of women in the changing American society of the 70's and still remains very relevant nowadays. Brilliantly directed, written and acted by Barbara Loden, this is truly an essential film of American independent cinema that everyone should watch. Harrowing and bold, it ends with one of the most heartwrenching images that will remain with me for quite a while. There are some films that change our perception of the world - this is one of them.