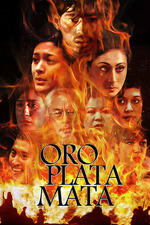 wow, didn't expect this to be as masterful as it was

my favorite kind of movie, a grand epic with incredible production design and period detail, fully immersing the audience into its world: the erupting anxiety-induced hysteria of japanese-occupied philippines circa 1941-5

at its best it reminds me of the narrative scope and ambition of the taiwanese new wave masterpieces that succeeds this later on in the decade with the works of hou hsiao-hsien (particularly city of sadness) and edward yang. it also possesses a limber narrative energy that one rarely gets in films as long as this (a bit over 3 hours) that kept me and the mostly packed audience invested all throughout

i'm a big fan of this and i could go into a lot more detail and just say more and more—i would write papers on this if i could on its production design, use of language, development of its mise en scène, the use of filipino and spanish archetypes, class structures, social criticism of our role in the war, social criticism of the martial law period it was made in, etc —but i'm sleepy and it's getting late