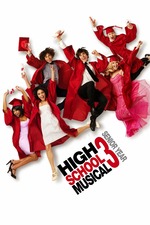 Because HSM was one of my early childhood obsessions and it's so commercial, I always assumed it was cheesy and whacky and nostalgic. I was dead wrong. I've watched this about 5 times since Disney+ came out and I wish more people would take the time to unironically appreciate it.

I don't even know where to begin. HSM themes have always been incredibly wholesome and inclusive; about breaking class norms and not letting prejudice get in the way. They're about creating an environment where everyone can let their talents shine and be true to who they are, and how friends should lift each other up and work together instead of upholding expectations of each other that pressure the other. (Quick mention: the diversity of the cast!)

It's great because it doesn't just pretend that it's normal for everyone to be into theater and singing, it specifically shows the struggle of how performing is perceived as awkward and uncool and how the school environment changes to a more welcoming one as they address their prejudices and fears. Once they all open up, they all start to thrive and connect. That's mf cute don't @ me.

It's really obvious HSM3 is the only one made for the big screen. It stood out to me immediately. The production quality of this film is so much higher.

I just knew right from the opening scene this film was so much better than I thought. I've watched that opening scene at least 20 times. The way the basketball game is choreographed and shot, how the music is incorporated, the switches between game and cheerleaders and coach, it just always gets my blood pumping. SO GOOD.

A film like this leaves room for imagination and creativity, and good use was made. The sets, costumes, cinematography are so pleasing to look at. Combined with the mesmerizing choreography (SERIOUSLY) I can never look away. Mind you, Kenny Ortega choreographed Dirty mf Dancing. He's not just some Disney Channel money printer. And this film specifically has a great variety of dance styles, which is so overlooked.

You can really tell the actors have grown into their roles and the production has evolved, the characters are more developed and they got a lovely conclusion. There's so many details to enjoy, I feel like I still haven't seen half of it. Chad's T shirts, for example.

HONORABLE MENTION 🗣 to the chemistry between Troy and Gabriella. Gaga and Cooper take fucking notes. Zac and Vanessa have had an insane chemistry since their very first scene in HSM1 and it never stopped. It's so detailed and captivating, I don't think I see teen romance this believable very often. And it's definitely not the plot that gives it credibility and weight, it's the actors.

I have a feeling HSM3 will be the type of movie that is now perceived as a cheesy teen hit, but the next generation of edgy teens will unironically adore as a 00s classic. Again, don't fucking @ me.

now tell me,
WHAT TEAM?