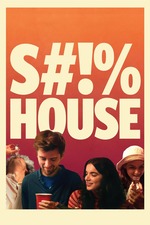 “There’s nothing wrong with needing a hug to get you through the day.”

My favourite aspect of “Shithouse” was just the sheer relatability of it all. The film prominently consists of Alex (Cooper Raiff’s character) struggling to integrate into the anxiety inducing setting of college. Now I’m from the U.K and college is quite different compared to college in the U.S but still many of Alex’s worries and premonitions were things that I could relate to last year when I started college : not being afraid to talk to your parents when you need some guidance, finding it very difficult to socialise with people (ESPECIALLY the opposite sex) and of course just the cunning anxiety that can creep up on you and make you feel like you’re nothing. The difference between the awkward and the tender moments was something that I thought Raiff captured beautifully through this film, the film isn’t like a fantasy but more on the lines of a reflection of real life endeavours.

The film doesn’t have a very large cast and that’s most likely due to the low budget of the film and this being Raiff’s first film but on the upside : this allows the film to have many aforementioned “tender” moments which really help to build character. A great example of restrictions actually creating an advantage for the storytelling. Raiff directed, wrote and stars in this picture and he is definitely one to look out for because this guy is already a bit of a hero to me since he’s already made a feature debut and it’s much better than just being “watchable”. Raiff obviously is gifted behind the camera and in front of it and I truly hope he goes on to make even greater things because he’s definitely got potential and I can’t wait to see what he makes next.

Logan Miller from “Love Simon” fame is also in this movie and he is truly hilarious in this movie. I think that Miller in all the films I’ve seen him in has really proved to me that he is one of the funniest younger performers in film at the moment because he really does a great job in this role and the others that I’ve seen him in. Miller plays a character who shouldn’t be likeable but I loved every minute that he was on screen. Great performance and great casting !

The film actually utilises jump-cuts in a really great way. In this day and age : jump-cuts to me are terribly used in modern films. They’re usually used in a very messy way particularly in action films but also other genres, so it really makes me joyous when a filmmaker can utilise a jump-cut in a unique way and this film does in multiple scenes ! I won’t spoil the scenes but the scenes are very effective and I thought it was a great decision.
The film as a whole was actually really funny and works as a comedy aswell as a really great character piece.

I think the downsides of the film usually comes with the characters that aren’t played by Raiff or Miller as they’re all gigantic pricks and not really fun to watch at all. The film is built upon the romance of Raiff’s character Alex and Maggie played by Dylan Gelula but I couldn’t get myself invested in this romance at all as Maggie really was just a giant bitch, maybe I’m biased cause I’ve met girls like this before and also I really liked Raiff in the film and the way Maggie treated him really didn’t go well with me.

The script itself has some great scenes and character moments but a lot of it was sadly messy at times and I think that if the screenplay just went through maybe one or two more drafts it would have been better and more refined.

“Shithouse” was a really good movie and I think you should all go see and support this independent gem !

“I have zero friends.”

Recommend me some films !

The Reel House liked these reviews

The Reel House is using Letterboxd to share film reviews and lists with friends. Join here.