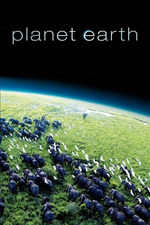 Me watching a snow leopard in the middle of a winter storm forced to come back to their hungry mate empty handed after bungling an attack: These are stories that people can identify with.

I genuinely think something like this might be the greatest use of cameras and film as a medium. We can get stories and empathy from the theatre, literature and music, and historically always have. But until relatively recent, outside of paintings, no one could see the world that wasn't directly in front of them. You might read about a rainforest or grand mountain peak and huge waterfalls and the animals there, but you couldn't witness it. And now we can. And watching this series just filled me with such an incredible sense of awe and amazement. I'll never see most of the places and animals depicted here in real life, but it's such an eye opening and thrilling privalege to get to experience them this way and witness the world beyond my limited viewpoint.