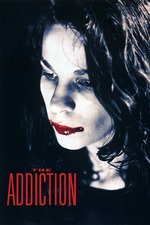 Some of the *great* quotes from Abel on the new blu-ray commentary:

"There he is right there, Russell" (after Russell Simmons' credit)

"Yeah, these are all the old favorites..." (just watching the credits)

"We had to do one black and white film, man."

"*singing*, I wanna get hiiiiiigh"

"This is pre-Uber New York, dog"

"You gotta give the vampire shit credit. Who would even come up with that?"

"Was that a lighting effect or someone just bumped into the curtain?"

"Bresson is always the influence."

"Hamburgers are still around."

"I'm looking to do a film about Auschwitz"

"That is not chocolate syrup."

"Now if you want to live near Washington Square, you need to be Donald Trump's fuckin' niece."

"It's nothing." (when asked what he thinks of the restoration)

"Imagine that we're sitting on a couch together, wherever you are."

"Now it's Man with the Golden Arm time"

"I'm gonna make this fucking Auschwitz, I don't even give a fuck."

"Oh man, we missed the fucking sound effect on that head."

Ant-Man and the Wasp