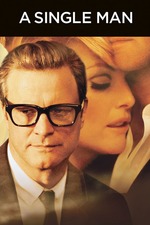 Utterly breathtaking. From the opening shot, Tom Ford sweeps the viewer into the world that he's created - one where every details seems to matter. It makes perfect sense that Ford would care so much about aesthetic. Here, it's what makes the film feel special.

Yes, the performances are incredible and heart wrenching. It's the type of film that will leave most people deeply moved and devastated. The plot, however, is paint by numbers. It's handled incredibly well, but it isn't particularly mind blowing.

Like I said, though: A Single Man feels special. The amount of care put into recreating the time period, into using sets and costumes and shots as devices to establish and develop characters - it's amazing. Each of the performers takes their role and wraps themselves in it, making it their own.

I could, of course, go on a lot longer about A Single Man. Perhaps in the future I will - I'd certainly like to. But the film is tight and compact, so I guess I'll use that as my excuse for cutting this off here.

The Assassination of Jesse James by the Coward…