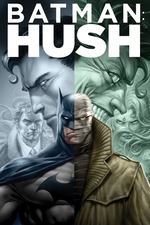 I've fallen behind on the DC animated movies over the last year (in part because the quality's taken a hit but mostly just because I don't care for the Death of Superman story) but I do tend to enjoy them. Their length and relative lack of depth make them good movies to toss on in the evening after a long day. Hush fits that bill--it's entertaining enough and clocks in just over 80 minutes. It was also the first Batman comic I remember reading, and has a special place in my heart as a result.

Even though I've cooled on it a lot since I was 14, I did come away from this adaptation a bit disappointed. Loeb and Lee's comic definitely buckles under its weight, and the movie makes concessions to that. But in its cuts it loses a lot of what I think holds up about the comic. The source material also doesn't necessarily make good on the idea of Batman aging out of his career or the complex systems that keep Gotham's villains in business, but the movie doesn't even try.

Honestly, I think I'm Ok with that--the one change I really dislike is swapping Croc for Bane and largely removing the rest of the subplot. Hush's real problems are mostly the same as the recent run of these movies--the voice acting has really taken a hit across the board and the animation is really not up to snuff. Granted, I'm sure these are made on next to zero budget and pumped out extremely quickly, so credit for the people working on them for getting them to where they're at.

I would, of course, like to see DC invest a bunch of money in a couple of these and make some genuinely good movies again, rather than the satisfying but throwaway output of the last couple years.