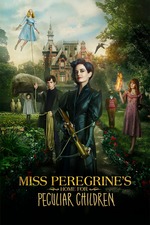 Miss Peregrine's came out at a time when I was seeing a ton of movies while also being incredibly busy balancing school and an internship, so despite really loving both the source material and Tim Burton, it just slipped through the cracks. I've been meaning to get around to it ever since, hoping I would find a bit of a hidden gem that appealed to my sensibilities.

Unfortunately, that's not exactly the case. Certain elements of the movie do work, but it suffers from spending too much time on the plot and not enough with the characters. Unlike the source material, the characters end up being more conduits for cool powers than anything else. Which is... fine, I guess, but it leaves little room for emotional payoffs.

I know it sucks to just compare movies to their source material, but this one feels especially egregious because it wipes away so much of what made the novel good. There are some cool visuals, but the atmospheric horror of the book's first act is nowhere to be found. There are vague gestures at themes of trauma, but they're only deserved because a line of dialogue tells us they are, not because the movie successfully grapples with them.

Ultimately, it just seems kinda weird this movie turned out the way it did. Burton certainly isn't the director he was 15 years ago, but this movie really seems to lack his signature touch. It feels like studio drivel, leading me to believe he was either extremely reigned in or just checked out. The way the adaptation turned out is a massive bummer--I don't know if the book could ever be made to work in movie form, but Burton seemed like a great fit for the job. Oh well.

They Shall Not Grow Old