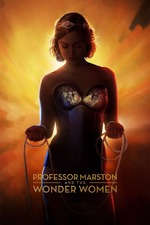 Professor Marston and the Wonder Women

Considering comments made by the Marston estate, it's pertinent to preface this review with an acknowledgement that Professor Marston & the Wonder Women, in all likelihood, is not an accurate depiction of the lives of William Moulton Marston, Elizabeth Marston, and Olive Byrne.

With that out of the way, this film is fantastic. It's rare that a film is so careful in its depiction of sex, romance, and sexuality. At no moment does the film feel exploitative. Rather, it is concerned with telling a sex positive story about three individuals who clearly loved one another very deeply.

More than anything else, Professor Marston & the Wonder Woman is a love story. Yes, it details the history behind the creation of one of the most iconic superheroes ever. And while the Wonder Woman comic is a key story telling device, it never once feels like the focus. Actually, it's rather easy to forget, at times.

William, Elizabeth, and Olive's relationship is the focus of the film. That relationship is handled lovingly, their arcs carefully crafted and a joy to watch. Despite setbacks, this is often a feel good film, a celebration of romance and sex positivity. The willingness to present this kind of story - one of a polygamous, queer relationship - in a positive light is heartening.

The veracity of the events portrayed in Professor Marston & the Wonder Women is worth calling into question, to be sure. But the story told here ranks among the best drams of the year thus far. It's an exciting watch, in spite of a middle act that flounders a little bit.

Slight pacing issues aside, my only issue with the film is the choice of music. The film's first sex scene is marred by poor music - it's fun, sure, but it also comes across as overly corny. On that topic, I was at times legitimately surprised the lengths to which the film goes. It's never pornographic, but I didn't expect soft bondage. As with the relationship, this too is portrayed in a sex positive manner.

Honestly, there's not much to dislike about the film. The performances are vibrant, and the cast has superb onscreen chemistry. The writing is quite good, and above all it makes for a really enjoyable experience. It may not be a poignant masterpiece, but it's too much of a good time to really care.