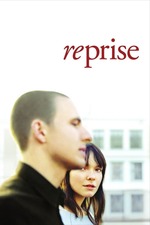 Reprise is a film that is stunning in its intimacy. Every shot, every line of dialogue, every cut feels purpose built to reflect this. there are plenty of ultra close shots, and we often view the world from strange angles.

Despite its melancholy, Reprise left me constantly smiling. It took the film all of five minutes to make me care about the characters. Every second I got to spend with them felt like a treat, even when things weren't going well.

The fact that things often don't go so well does make this film a little difficult to watch at times. That is, of course, the danger of creating characters that are so easy to get invested in. Characters that, in a lot of ways, felt like a reflection of myself and people I knew.

At the core of Reprise are the relationships between the characters, and not simply in the romantic sense. It's a film about grappling with identity, and how that informs interactions with... well, with everyone. The performances really sell this, and make the journey an incredibly fulfilling, if devastating, one.

Also Viktoria Winge, who plays Kari, looks a lot like Lauren Mayberry so that was pretty neat.

The Assassination of Jesse James by the Coward…