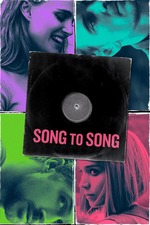 Song to Song is not a film that's going to work for everyone - although you could say the same of all of Malick's work. Some of it hasn't worked for me *cough* Knight of Cups *cough.*

But the emotions captured by Song to Song hit me, and resonated. I literally missed the last train back to campus because I sat through the credits, letting the experience flow over me. It captures a beautiful sense of melancholy.

Really, Song to Song is more an experience - an atmosphere, even - than a story. There's conflict, but it feels fleeting and irrelevant. It's the music, the subtleties of the performances, the cuts, the shots lingering on pieces of scenery that make this film the tour de force that it is.

Song to Song has left me with this brutal sense of emptiness, and a lot to mull over. It's a film I feel will need multiple viewings to understand past the raw emotions.

I know I said this film won't work for everyone, but I do hope people give it a shot. The more I think about it, and try to put my feelings into words, the more special the film seems to become to me.