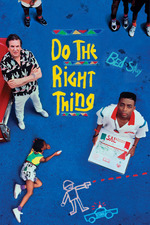 I'd like to thank my local movie theater for having a $5 showing.
If it wasn't for my Friday night boredom, I don't think I would have ever come across this movie.

Spike Lee captures a day in the life of the bed-stuy neighborhood so. beautifully and with honesty. I came into the movie theater with no expectations or understanding of what this story would be about. Although at the beginning I was lost on what this movie would be about and confused on why it was two hours long, I was not bored for a single minute. Lee has a way of keeping the movie alive and energetic. While I'm not a huge fan of tilted angles and an admirer of Wes Anderson. symmetry, Lee's camera work fits very well. To be honest, I don't think the sex scene was necessary at all, weird vibes in the theater to see a whole shot of ice boobs. Regardless, I think this is one of the best movies to date.

I have to comment on Sal and his sons. While it was obvious of the racism that Pino exudes, for a moment in the movie I thought that Sal was alright (kind of). The scene where Sal and Pino sit down and Sal explains why he wants to stay in Bed-Stuy and how he has no problem with the community they're surrounded by contradicts against how he acts during literally any other part of the movie. Yeah, the dialogue might seem redeeming, but it is clear to see that Sal was racist throughout the entire movie.

It is sad to see that 32 years later, the hate committed towards the black community still exists, and that we still have to fight to exclaim that black lives matter. Radio Raheems death was something I did not see coming at the beginning of the movie, but I could see his unfortunate fate when he steps into Sals pizza shop with buggin out. Thirty two years later we still have cops abusing their power. How Sal was allowed to walk free was truly sickening.

Spike Lee captures something more than I can put into words and that is truth.

Did mookie do the right thing? I think my answer would be debatable. but yeah, he did.