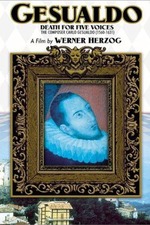 I find Herzog’s documentaries most interesting when there’s a particularly intense friction between the subject matter and the liberties of his approach (mixing the staged and scripted with the captured; feeding lines or “guiding” interviewees), Grizzly Man, Into the Abyss, and Gesualdo: Death for Five Voices being the strongest examples. Herzog’s shies away neither from counterpoints that disrupt his theses, nor the ways in which a camera brings the performer out of a subject, so the narrativity of reality becomes subject as much as one man’s delusions about nature, the horrors of state execution, or the eccentricities and crimes of an Italian composer. This is precisely as “irresponsible” as it sounds by journalistic standards, and why his best work is so provocative: the truth standards of the documentary never look so feeble, nay duplicitous, as they do under this light. Not only must you have an angle when approaching a subject to film — neutrality itself being an angle — but you will be competing and sharing, always, with other angles. Ecstatic truth may not be much of a doctrine, as the truth it promises usually fails to resolve, but at his most engaged Herzog poses a legitimate challenge to the documentary form. This is his most playful, Herzog and interviewees inventing alike; the mythic stature of Carlo Gesualdo reverberates with the director’s manipulation of of the subject matter. The gesticulations of the singers: has music as possession, of performer by composer, ever been expressed so powerfully? It’s a film on possession, of the present by the past, of imagination by reputation and myth, of genius by madness, and of the filmmaker by their subject.