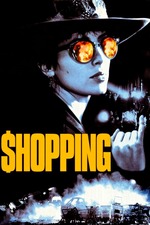 I don’t read the nihilism frequently mentioned in reviews. Jude Law’s character is nihilistic, or suicidal, to be sure, but the film doesn’t reflect his attitude. That’s why he’s tempered by Sadie Frost’s character. Her perspective puts Law and Sean Pertwee into a frame, a masculine competition that draws more attention, in the scale from them to Sean Bean’s character, to a social condition. All of their actions are reactions against their poverty. Law is, again, suicidal, unlike the grasping Pertwee and distanced Bean, but of course he’s consequently a more romantic figure -- his headlong acceleration is the film’s primary source of kinetic joy: he bursts through barriers, plays chicken with the cops. It’s also the consummation of his death drive; Pertwee and Bean’s characters seem more realistic portrayals in their assumption of capitalist practices in attempt to escape their world, whereas Law gives us, ultimately, the poetry in the film’s ending moments: cutting between his bloodied and splayed body, gazing with unreadable expression through the gleaming shop window at the mannequin with champagne. One of the few W.S. tableaux in the film: the camera cranes out from the window, past the car, and upward as the cops arrive at the scene of carnage: broken metal and young bodies before the image of luxury. After repeatedly tempting the barrier, they finally smash against it, unable to escape their world of debris. They are screened; later, W.S. would, with the last three Resident Evil films, find his way through that screen, appropriately with 3D, and the acknowledgement, in Alice, that resistance must mutate.