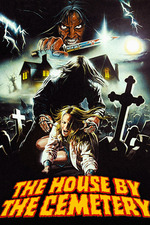 The House by the Cemetery

The House by the Cemetery 1981

This has a reputation as the most conventional of Fulci's Fulvia classics but that's a relative quality and only true at a glance. It has more narrative shape, to be sure, than The Beyond or City of the Living Dead , but, like Zombie, the semblance of coherence adds greater emphasis to the uncanny, giving it a nest to roost. There, the return of the colonial repressed, here, the atomization of the family. The shocks have more weight because there's a definitive center they corrode. Each family member's perspective is uncertain and skewed between reality and some psychological disturbance or another: Bob, his contact with the paranormal; Lucy, her neurosis and paranoia; Norman, his obsession with the house and remoteness as a father and husband.

The house, like Matool in Zombie, the hotel in The Beyond, and Dunwich in City of the Living Dead , performs a centripetal function, drawing players into its reality. These realities break with the deliberately contrasted cityscape the characters travel from (The Beyond is an exception, as we're never really out of the hotel's influence), but there's always a fateful link, through image or object, between this setting and the cursed locale. The ghost ship brings plague to New York in Zombie, Mary's vision ties her to Dunwich in City of the Living Dead, and here the family have a picture of the house in their apartment living room. (Manhattan Baby does the most with this linked locale conceit, as reality is pulled between a New York apartment and an Egyptian tomb throughout its runtime -- one character is even teleported from a room to the middle of the desert) These links suggest that the characters have always been trapped in these other worlds, that their movement between them is illusion -- when a Fulci character dies, without resistance, stunned before doom, one feels the culmination of this fated atmosphere: these figures were made to die.