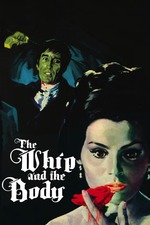 The Whip and the Body

Bava pulls from sunset over sea to color his interiors — purples, blues, teals & greens, the burning of reds and oranges — but these are also colors of mortification, bruising, wounds. The blue of the sea and green of sickly flesh, the purple of twilight and that of lash marks on pale skin. The red-orange disc of the sun, the deeper red of a rose, the bloom of blood on cloth: the sun sets, the rose withers, and people die. Ensconcing all is that most powerful achromatic, black. The colors, and the figures hiding in their pools or braving the distances between, could be seen as struggling against the dark, for life, against death. Conversely, they may be gesturing towards it, lured, enamored. They tell us neither definitively because they live both truths.

It took me some time to realize this was no longer my favorite Bava film — I've come to prefer the more active camera involvement and brutal ironies of Blood and Black Lace and A Bay of Blood — but it's still the masterpiece of Gothic horror. More articulation, someday, but for now a swoon for a rare film that probes the dark without moralist handrails.