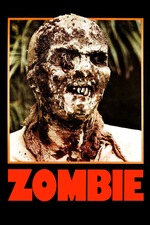 Post-narrative. This is not to confirm the common (mis)conception that Fulci is narratively inept (this idea is directly contrasted earlier in his career: Don't Torture a Duckling is a fluid network narrative decades ahead of the vogue; Beatrice Cenci cogently layers differing flashbacks, investigations, and personal reflections). Rather, Fulci here begins his radical stage (culminating in the films he'd make in the 1980s) of dismantling linear plot in order to explore ideas or aesthetics.

Fulci, however, does not fully abandon narrative. Zombie is delineated by the signposts of plot; like several of his most celebrated horror films in the years following, the semblance of narrative coherence maintains a basic structure (a small note: even here, Fulci isn't narratively inept: he manages to build a narrative cinema of ellipses, absences, unsaid expressions). Here, the maintenance of a horror plot allows for a cinema slightly more centered than City of the Living Dead or The Beyond.

This is pure cinema. A film of atmospheres, moods, aesthetics. A movement from metropolitan anonymity to tropical decay; life and death. Ideas are not non-existent, but notions of colonial massacre and associated guilt aren't tracts to be exploited. They bubble and pop as if in a tempestuous caldron, alternating resonances and concepts erupting and dissolving effervescently.

Everything here is concentrated towards sensation, texture, emotion, abstraction. The cutting isn't as jarring as The Beyond's, Fulci isn't running a playbook of cognitive disruption. What we get are transmutations of mood, doom casting its spell, zooms altering the meaning of seemingly passive shots irrevocably. Everything in this film is dynamic. From scene to scene the vacillations of light adapt tone effortlessly; a recollection of events clashes against the opening sequence, not mistakenly but brilliantly: Fulci doesn't need signposts, his cinema is entirely immersive, either you keep up with his construction or you fail.

Every cut is a universe. Floating at sea is an amniotic experience of laxity upset by the balletic movements of a shark. Blue meets green meets grey meets brown meets red meets blue meets white. This is a film that moves to its own rhythms, I will be trying to catch up to it forever.

Four of the Apocalypse