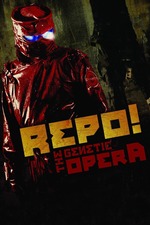 The most Hot Topic mall goth movie ever made. For a feature film with an 8 million dollar budget, it never manages to shake off the feeling that it's bad made for tv movie. Every single shot in the film is overexposed, so it always looks like it's a flashback or something. I found it pretty distracting. I like many of the film's ideas on paper, but none of them are really fleshed out. Also, I can't figure out the tone the movie is going for. Some scenes seem to want to be a black comedy, but then it gets undermined by a sound effect, an editing choice, or a poor performance. I suppose there are a few neat visuals and maybe a banger song or two. You could probably get a better experience than watching the movie by just listening to "Zydrate Anatomy" and "Chase the Morning" off the soundtrack. Or better yet, just dye your hair black, put on eyeliner, and throw on some MCR.