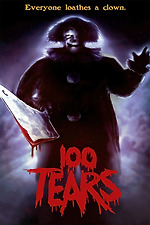 I need to state this right up top. This movie is awful. Really, really awful. You can give it as much credit as you want for doing what it does with its absolute 0 budget, but this is a bad movie no matter how you spin it. There are plenty of great 0 budget movies, this isn't one of them. That said, this wasn't without enjoyability. The only thing this movie does better than its really damn good gore effects is its villain design. That cleaver is fucking huge, and the clown has a genuine presence. Pretty much the polar opposite killer clown as somebody like Art from Terrifier, which is a pretty comparable movie all things considered. Where Terrifier has the edge over this movie for me is that Terrifier's bad acting is so much less egregious. Terrifier knows how to keep things focused on the horror, when 100 tears is doing plot, fuck is it miserable. But, its free for anyone on tubi, so you could have far worse things on in the background, there's some fun to be had here.