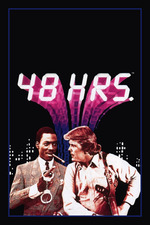 Not sure how San Francisco became the city of choice for so many cop films - the architecture, the street layout? - but this is simultaneously an entry in that Bullitt-Dirty Harry lineage, and also the start of something new.... the buddy cop film. However, genetically this has much more in common with those films than Rush Hour. This seems to get billed as an action comedy but the only comedy, really, is Eddie Murphy cracking wise in a world out to kill him. Fernet Branca to the genre's Jägermeister median.

Oh, it also looks great. At night especially. The colour is incredible and I assume it was filmed on stock without an anti-halation backing, so the profuse mist and neon glows out into the whole frame.