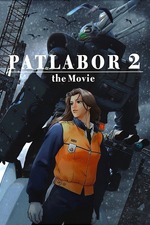 There's a moment, about a third of the way through, where the music rises, the sky is pastel behind a static shot of a derelict warehouse, and you realise that a gear somewhere has shifted subtly, and you're really watching a film essay about the ambiguities of postwar Japan. Then almost as soon as you've noticed, the music fades, and you are set back down to continue with the narrative. It's effortless, and beautiful, and is just one of the ways that this film assumes the form of its predecessor, then blows it up from the inside.

It's not that this is entirely outside the continuity or sensibility of the previous film or associated series. It just asks the question: what if our rag-tag group of robot-piloting traffic cops were suddenly thrust into the middle of a rightwing military coup, one whose perpetrators seem to rely on confounding our (or at least the state's) increasingly machinic ways of seeing the world, through radar, networked sensors, or closed-circuit television.

Like many of his contemporaries and near-contemporaries in Japanese animation, Mamoru Oshii came out of the Japanese New Left, whose extreme militancy (sometimes to the point of cultishness) is frequently absent from our historiographies of the 1960s and 1970s. It is the source of Hayao Miyazaki's critiques of liberal consumerism and militarism, among others. Oshii's conclusions are a little different: this film expresses his disgust at a managerial state, and his despair at a population seemingly happy to be channeled by it.

They take radically different aesthetic approaches too: unlike Miyazaki, who delights in archaeofuturist utopian visions, Oshii loves getting up close and personal with the objects of his critique. In no other animated film will you see technology rendered with the care, detail, and precision it is rendered with here. Everything has a clear and obvious purpose and nothing is superfluous. Imagining what user interfaces and technological integration could look like in 2002 from the point of view of 1993, and getting everything broadly right, is no mean feat.

Perhaps here we find a source of Oshii's despair: predicting how the future looks means you are no longer dazzled by it when you see it; instead you are unable to ignore how the old channels of power and control are only carved deeper by the depth of history. For Oshii, this means a future where "war" and "peace" are rendered entirely indistinguishable.