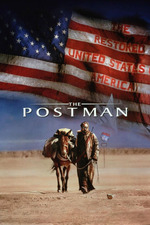 When this finished I was laughing hysterically for a solid four or five minutes: I still have the giggles as I write this. It is a testament to whatever Kevin Costner is, or whatever he was in the nineties, that his name is far more frequently attached to Waterworld than this monstrosity. This is Costner on Costner, Costner squared, Costner reaching the later stages of stellar evolution and engulfing the planets orbiting closest to him.

The first hour is solid enough, even possibly too grim: anyone who ever wanted a Fallout film adaptation should be pretty pleased. It's when Costner finally becomes the eponymous Postman that this turkey soars. From then on we're treated to him doing a really unconvincing job of appearing reluctant to take on the messianic role that fate has thrust upon him. For two more hours. This is Costner's world, with Costner logic, and you will accept it. By the time Tom Petty appears as the mayor of a town built on a hydroelectric dam, it's fine.

Possibly the most fucked-up aspect of it all nearly 25 years later is that it is also a near-perfect presentation of the "Resistance" imaginary, from the absurd jingoism channeled through institutions like... the post office, to the nightmares about secessionist militias.

I enjoyed every minute of it, and I will never watch it again.