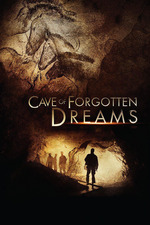 I know a guy who watched this movie, fell asleep in the middle of it, and woke up to the postscript. He saw an albino crocodile staring at him. "What the ...???"

But that's exactly the question Herzog wants to ask, or actually asks aloud.

This documentary about Chauvet cave in France is a cut or three above typical documentaries. If this were PBS, you'd get the facts, the interviews with scientists, the speculations about how this all came to be, and some history.

All of that is here, but it's subsumed within the WONDER that Herzog is trying hard, maybe too hard, to make his viewers feel. At one point he says that everybody who walks into Chauvet cave feels some kind of spiritual atmosphere, as if they are disturbing those who still roam and paint in the cave. The movie itself, especially the musical score, tries to evoke that.

I feel disturbed when I watch it. Why? The movie is clear: everything you do will be forgotten. And even if one thing that you leave behind -- a drawing, a piece of writing, an artifact -- if this one thing is found 30,000 years from now, will anybody have any clue about who you were, what you loved, what you thought about anything?

Deep history, and the knowledge that we will become deep history, turns all of our petty present concerns to dust. Herzog, I think, wants us to ponder that. He speculates that maybe somehow we are connected to the paleolithic peoples who painted in the Chauvet cave, perhaps even worshiped in it. We know the cave was used, probably for thousands of years, as a place to gather, to create, and who knows what else. These speculations seems plausible, maybe because we can only understand what we see through our own perspectives.

Yet Herzog knows better, and he shown it over and over again in other films (e.g., "Nosferatu"). Maybe the paleolithic peoples are unknowable, that we are projecting our own meanings onto the cave findings, that we cannot ever comprehend them. Near the end, one scientist turns to Australian aborigines who create rock-art to better understand what the Chauvet cave holds. I find this absurd, given that the aborigines are immensely separated in time and space from paleolithic Europeans.

I try to hope. We know the peoples here created art based on their lived experience. They seem to have tied this to some spiritual understanding, a world beyond themselves. They understood motion, change, and wonder. These concepts show up in all of the cave paintings.

At least that's what I think I see. (These paintings are great art, period. If nothing else, this film serves as a document to showcase them, and that's the reason why it's a great movie.)

But we return to those crocodiles, a sign of climate change, the inevitability of it no matter what or who is responsible. (The paleolithic artists lived, as we're told, during an Ice Age when you could walk from Paris to London on foot. This is not the same world, ecologically, geographically, and maybe culturally.)

That's the way Herzog ends, rather bleakly. But note that his film tries to stop that, to preserve history. It's a work of art about a work of art, with hopes that it might last a long time. 30,000 years? Who knows?