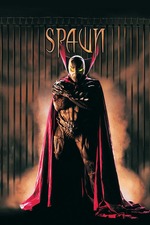 This would’ve benefited a lot by coming out just a few years later than it did, at least around the time of the first “X-Men” film. Spawn is an interesting character, but his fanciful nature requires an extensive amount of visual effects, and a director imaginative and capable enough to capture the comic's peculiar, semi-dark tone. This movie just seems like a series of missteps. First and foremost, this probably has the worst CGI effects of all time. That’s not hyperbole. It came out during an unfortunate window post-“Jurassic Park,” where filmmakers seemed eager to show off the amazing possibilities of what they could now visually bring to life, but the technology wasn’t sufficiently developed enough where it could stand on its own, removed from cleverly hidden or incorporated practical effects (as was done in “Jurassic Park”). I’m also always fascinated by the creative approach films take in trying to depict hell, as they usually just default to a traditional fiery abyss (like in this film), or with unholy imagery soaked in blood and gore. The hell scenes here are especially jarring as they evoke that same grating, blocky look so identifiable with early 3D video games of the same era.

John Leguizamo’s performance is so over-the-top that it’s beyond description; it’s like that scene in “The Matrix” where Neo finally breaks through and is able to see the underlying code behind everything, except here, Leguizamo seems to have broken free from the innate thespian safeguards present in the human mind that prevent us from chaotic overindulgence. He’s still the only thing worth watching in the film, as this movie essentially warps into his own personal playhouse a quarter of the way through. Michael Jai White is okay I guess, although the material doesn’t allow him much range beyond grimacing in pain, or more tender moments of him doubled over on the ground, grimacing in pain. You know, this movie might’ve been able to do something interesting in playing with the notion of demons: A man grappling with inner demons while being simultaneously tormented by external ones, and the blurred ambiguity between the two who may be causing or co-creating the other. But, abandon all ye hope if you’ve come to this movie to see anything narratively stimulating.

I’ve heard rumors of a new reboot in the works, and this would be an infinitely better time to have another go at this. It’s not just the progression and ubiquity of CGI effects today, but also because of the two different cinematic pathways already laid down by Marvel and DC—at least in tone and visual aesthetic. A new adaptation could hopefully find its own little space to occupy amongst these two spheres, nestled somewhere between the grim dark excess, and colorful phantasmagoria. This version however is simply stuck in limbo.