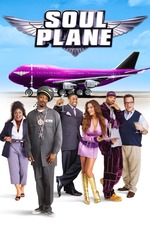 - Film Club Anniversary Scavenger Hunt: boxd.it/7uQXe
"(2) In honor of all the hidden gems out there, watch any film with a letterboxd rating of under 2.8 that you think there’s a chance you just might love (Todd)"

I'd gladly fly this airline... get the Kickstarter up.

After Nashawn Wade has a very horrible experience on a plane he sues the airline for a large amount of money. With his winnings he creates Nashawn Wade Airlines... an airline that caters to the black experience. I thought I might like this because I love the film Airplane and I find many of the members of this cast likable. The film is full slapstick camp ridiculousness and it's kind of funny at times and kind of horrible at others. I would say that this film starts pretty strong and then runs out of ideas. It's like as you see everything setting up you kind of understand what the whole movie will be and then you just kind of watch it in autopilot.

The strength of this film is when it is doing basic observational humor about race, sex, and class. This is done in a kind of clever way by having one white family be on the plane and seeing the experience through their eyes which actually reminds me of some of the early Chappelle's Show sketches. I also like a lot of the random humor here like having D.L. Hughley as a bathroom attendant and stuff like that. I found it pretty funny when it wasn't leaning so hard on homophobia and more mean-spirited racism and sexism... which it often does unfortunately. There are a number of parts that not only haven't aged well, weren't even especially kosher in 2004 and I should know... I was there.