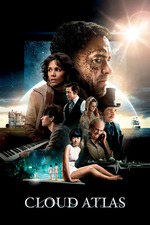 Despite its mediocre reception, CLOUD ATLAS is one of the bravest films ever made for me. It ambitiously spans a 500-year story arc in what I consider to be the most thorough examination of the human experience.

Each of its six timelines chronicles a significant point in history where one person, inspired by art, defies social norms and advances the state of mankind, fighting against every possible form of oppression that could exist in society, including slavery, classicism, racism, sexism, homophobia, and bigotry.

To me, this is fictional storytelling at its best. Just from watching the trailer alone, you could marvel in wonder about how a film like this could have ever been green-lit (it was produced independently for $130 million dollars). Every time I rewatch the film, it still brings me to tears. I even learned how to play the "Cloud Atlas Sextet" score on the piano. I don't even play the piano.

One of my favorites quotes of all time is from its novel written by David Mitchell, which I share with you below:

“Our lives are not our own. We are bound to others, past and present, and by each crime and every kindness, we birth our future.”

For those of you who didn't believe Cloud Atlas was thought-provoking or any good, I suggest reading my take on the film below, which I posted previously on a Reddit thread about the film.

Let me start by saying I usually hate it when people say "you missed something" or "you just didn't get it," but some people do love the movie (me being one of them), and after talking to various friends about it, I've come to the conclusion that the polarization comes down to how people have interpreted the movie VERY differently. I'm not saying there's a right or wrong way to go about it, but if you want to appreciate the movie more, here's what I got from it. SPOILERS BELOW.

Cloud Atlas chronicles significant points throughout the history of mankind where one person essentially defies social norms and advances the state of humanity. Think of it as social evolution as well as an individual journey of the soul. By soul, I mean each person's soul, which gets reincarnated time after time. All the characters played by a particular actor/actress in the different time periods are the same soul. If you follow them throughout the movie, you'll notice their souls change over time (ie. from evil to good, good to even better, etc). Some people have mapped out these journeys pretty well online.

More importantly, every time period in the movie centers around a character who has a shooting star birthmark. This mark symbolizes that this character's soul is about to make a huge leap upwards in their journey by defying social norms for the greater good of mankind. Let's look at who they are. I'll also star (*) each time period with an interesting explanation on one aspect of the "Everything is Connected" theme, which is basically that "art" arguably inspires this progress/social evolution.

1849: Adam Ewing, whose experiences end up convincing him to courageously defy his peers and the "natural order" of slavery by joining the Abolition movement.
*He writes a journal about it.

1936: Robert Frobisher (who unfortunately isn't ready to be open about his sexuality to the world) is brave enough to try to escape his social class. Although society gets the best of him and he ends up committing suicide, he manages to write and finish his Cloud Atlas Sextet before his death.
*Occurs after partially reading Adam's journal. Writes the Sextet.

2012: Timothy Cavendish, who with a few other elderly folk escape a nursing home that was essentially a "prison," where their family sent them to live out the rest of their days.
*Occurs after reading "The Luisa Rey Mystery." Timothy writes a screenplay about his experiences.

2144: Sonmi-451 joins and leads a rebellion against the enslavement of fabricants.
*Occurs after Somni and Yoona watch the film that Timothy wrote. Somni broadcasts her manifesto.

2321: Zachry convinces his tribe to leave Earth and be rescued.
*Occurs realizing that his tribe has misinterpreted Sonmi's manifesto and mistakingly regarded her as a deity.

Cloud Atlas was pretty mind-blowing to me for these reasons. Should you get the chance to watch it again, I hope you have a similar experience!