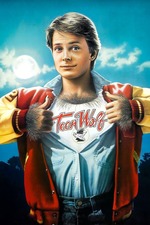 WARNING: Do not surf on moving vehicles.

Someone in my neighbourhood tried it once. Having wiped out in the process, he ended up a vegetable after sustaining severe brain damage. A clear case of don't try this at home, kids.

Besides that downer anecdote, this movie is so much fun! I had no idea. Somehow I went through all of my teen years being completely aware of it, yet never once having seen it.

Teen Wolf starts of like Tick Wolf. For the first thirty minutes you could spend the whole time just sitting there ticking off a checklist of teen movie tropes (a game of trope bingo, anyone?). Trying to buy alcohol with no ID, crushing on the blonde cheerleader who has an obnoxious boyfriend, the obligatory reference to pot, etc.

Then there is the matter of the wolf. The whole werewolf allegory thing was at times both equal parts stupid and hilarious. But it was surprisingly effective. Despite the fact that Scott Howard (Fox) seemed to be experiencing a rather delayed puberty, it still worked really well as a heightened portrayal of that bizarre rite of passage through which every boy becomes a man.

His appearance as the Teen Wolf is great and makes me think of the transition of the early 60s Beatles from bowl cuts and I Want To Hold Your Hand to the late 60s Beatles with shaggy hair and I Want You So Bad.

His initial fear of suddenly morphing into a shaggy dude with claws at the least appropriate moment certainly brought back some memories. I remember being twelve years old and sprouting a massive boner whenever so much as the wind changed direction. That was especially awkward in the public swimming pool before I realised the speedos my mum used to always buy me just aren't appropriate for more covert operations.

Michael J. Fox is great in this movie. I think he was in his mid-twenties when he acted in this film but he looks like he was barely out of puberty himself. What struck me was what a greatly expressive and physically comedic presence Fox has. His face slips and slides into all kinds of expressions of confusion, concern and consternation, just as much as clumsily, yet nimbly, his feet slip and slide down a recently mopped hallway while the rest of body flails all over the place.

And of course there is the girl. In true teen movie style, his best buddy since they were both knee high to a grasshopper, the girl with the improbably tomboyish name of Boof, is so obviously meant to be the girl he is bonking. His major crush on the bitch of a blonde cheerleader must be crushed! At the end of the day I cant help myself. I fall for these overused and predictable plotlines from the playbook for romance suckeroos all the time. As such, I spent most of the film rooting for some serious Wolf on Boof action.

A really fun teen movie. This is like Big Mouth before everything had to be so self-consciously super cool, clever and hip. It is daggy and it is silly. But it is funny and it gets a lot of things right. The only catch is that some of its attitudes are a little dated (I have to admit, their treatment of homosexuality is somewhat concerning). Anyways, next full moon, get your beard trimmer ready, sit down and check out Teen Wolf, perhaps with your Dad handy to explain some of the facts of werewolf life along the way.