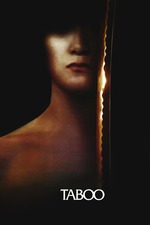 “Nothing that is expressed is obscene. What is obscene is what is hidden.”

No truer words could be expressed by Nagisa Ôshima regarding his own filmmaking than those and after a 13 year absence from the screen his final film is easily one of his best. Always controversial to say the least, Ôshima used an almost Freudian approach to his style of filmmaking, every action made by the characters could be boiled down to basic animalistic urges and sexual desire; In the Realm of the Senses being the most obvious. This film while obviously more subtle deals with much of the same subject matter. The english translation of the title is “Taboo” which is appropriate for a film handling the subject of homosexuality in the world of the Samurai. Initially the film deals with the senior officers training new recruits as they prepare to defend themselves against reformist forces. In a Dorain Gray-like situation the young Kanō Sōzaburō causes a major stir when he joins their ranks, many of the other recruits begin to vie for his attention, distracting the from them task at hand.

Elevated by an expectedly amazing soundtrack by Ryuichi Sakamoto the film has an almost hypnotic quality to it, becoming more and more dark and sinister as it progresses. The character’s true feelings and intentions are never made entirely clear and their descent into near-maddening states as they attempt to deal with the situation at hand is excellent. The handling of the subject matter is amicable too, while still unwanted the idea of homosexuality was not as controversial nor was it headline news in the 1800s; more something people just didn’t want to talk about. While most of the characters see it as something unimportant they all agree it’s an unwarranted distraction to their otherwise “perfect” military training facilities, conjuring up comparisons to the recent “Don’t Ask, Don’t Tell” debate.

A truly fantastic film, it’s a shame Ôshima’s poor health prevented him from doing any more films but to bookend your career with a movie as good as this one is something every filmmaker strives for.