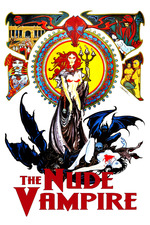 The Rollin World begins to take shape in his second feature. Biochemistry and vampirism mingle in the opening scene, merging classic horror lore with modern science, setting forth the first of several dichotomies that run throughout: Old/Young, Establishment/Counterculture, Science/Superstition, Logic/Illogic, Reality/Fantasy.

Like so much of Rollin, La Vampire Nue’s power is sourced from its capacity to lull and seduce the viewer with its dreamy pop-surrealism, as if to get the audience’s subconscious in dialogue with that of the director. The proceedings make very little actual sense, but the effects at work possess a primal charge and oneiric potency. Look no further than the use of unmotivated light in nighttime exteriors — an early face-off on a bridge recalls Magritte in its juxtaposition of light and shadow — or the emphasis on setting over narrative information in extended long-takes, be the camera capturing figures walking through a chateau’s grand hall or regarding two elderly gatekeepers sitting in stasis.

On the face of it, these languorous shots, studied and self-conscious, contemplating every crevice of the face and space, as if to cement them in the audience’s mind, are a key to the heart of Rollin's oeuvre. His cinema is one informed by his own nostalgia, and, in these moments, you sense him conjuring old memories in the creation of images that seep into our psyches and haunt us, a passing down of remembrance that itself becomes a memory of our own.

Side Note: In 1970, the race of mutants that ultimately materialize might've represented the rebellious Post-'68 Youth in opposition to the stuffy Old Guard. In 2021, the metaphor remains powerful but the meaning is less concrete, since they can serve as a surrogate for any number of marginalized groups. Like a dream, read into it what you will.