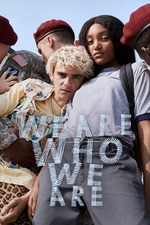 Director Luca Guadagnino's sexually fluid mini-series takes the viewer to a U.S. army base in Italy in 2016. It centers on the lesbian camp commander (Chloë Sivigny), her wife (Alice Braga) and her rebellious 14-year old son Fraser (a superbly convincing, gawky performance by Jack Dylan Glazer.) But central to the plot are a number of interesting actors new to me, especially sloe-eyed Jordan Kristine Seamón as a young girl with gender issues who befriends Glazer's teenage misfit, and settles into a chaste relationship that benefits both to deal with their adolescent identity crises. The narrative rambles on for eight episodes, mostly centered on the army-brat kids set loose in the permissive Italian society at large, while being somewhat constrained by their American military parents. It's a fascinating paradox that propels the story through comic and tragic events. What really works is Guadagnino's unconventional camera work, in constant motion with off center framing that offers surprises at every turn. And kudos to whoever provided some of the wildest costumes ever for Fraser, the teen-age eccentric run riot. Bottom line, this is one TV mini-series that dares to be different and succeeds magnificently. I'm hoping for a sequel, since the story left much to be explored with these characters.