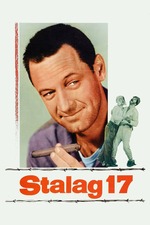 Stalag 17 knows how to strike the perfect balance between drama and comedy. This film could easily be turned into a heavy war drama, but a lighter approach was chosen, without losing its serious power and dramatic side. This makes Stalag 17 both very entertaining and clever at storytelling. William Holden won the Academy Awards for Best Actor for the role of an unsympathetic character here about an opportunist imprisoned in a German PoW camp. The director superbly balances elements of drama, satire and comedy and captures claustrophobia in camp life.

Up to this point there is no Billy Wilder’s filmography I dislike, Wilder has created many films that have earned the status of brilliance classics, but the WWII war comedy-drama Stalag 17 is arguably an often-overlooked masterwork. The script is the good instance of how to combine a tight plot with sharp dialogue and great characters, and the acting is just excellent. The opening begins with the POWs assisting two prisoners in their escape attempt, whereas the cynical Sgt. J.J. Sefton separates himself from the rest. Due to the arrogance and indifference of Sefton's character, the other camp members became suspicious of Sefton that he was a Nazi’s spy. The story is well developed, with developments coming at a careful pace, and some lighter material. Billy Wilder's direction also deserve big credit, in addition to the way each sequence fits so well, there are some individual scenes and shots that are done in impressive ways inconspicuous.

This is one is another perfect instance of a great film making. What I like most about Stalag 17 is the character development itself, all the characters here are written clearly and carefully, with lots of memorable characters that each of it has a tremendous impact to the story. Wilder's films remain fresh today because of his near-perfect script that has honesty rather than sentimentality, and his willingness to let his characters and story. Stalag 17 is one of the many reasons why I always glorify the name Billy Wilder.

Ace in the Hole