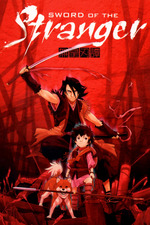 Sword of the Stranger

Autumnal leaves cascading the jagged edges of the mountainsides.

Blankets of winter snow lining the pathways of the forest.

A lone samurai with a past that’s inflicted by a moral quandary.

A friendship with a cocky kid and his loyal shiba-inu.

Redemption, friendship, camaraderie and a reminder of how incredibly satisfying and beautiful this medium can truly be. See, the plot itself is a little lacklustre. It’s probably the only thing which holds the film back, but in the same breath I’m happy about that. Very rarely does this happen but a lack of a compelling plot-line instead elevated everything else that I was enamoured by during my viewing. The characters were all perfect.

Whether it’s from the visual style to the little intricacies of their behaviour to the pitch perfect voice acting, the characters are all likeable or at least respectable, and if there’s some that you detest it’s because they’re there solely for the purpose of being detestable. Formulaic and even generic is a term that wouldn’t be out of the question for how to best describe the plot line and the characters but that’s weirdly not a critique of the film.

Instead it’s a reason to be all the more awestruck at how special this film felt despite that. And again, it’s due to all the little intricacies that are apparent in the film. It’s also worth noting that my mind ponders on certain questions or even realisations as a result of a deeply sympathetic and intriguing character who’s backstory is shrouded in ambiguity and mystery. The film has two main characters who are foreigners but outside of that simple fact being pointed out we’re hardly privy to anything beyond that. It’s like when you see the scars that tattoo the back of no-name with the realisation that each scar holds it’s own story, the film feels quite poignant that way and every emotional beat ends up more heartfelt as a result. Despite the time constraints this films does way too well in that angle.

And besides that, what a gorgeously illustrated anime. The sound design is brilliant too. That evocative and almost moving soundtrack pieces everything together and man those battle scenes were absolutely godly.

The final fight sequence was perfection. Dancing with swords but never too swift and not too passive. Really up there with some of the finest action sequences I’ve ever seen and that’s taking into account everything beyond anime too. I feel like I spent probably half an hour more than anyone else whilst watching this since I found myself rewinding that final fight multiple times.

The Woman Who Ran