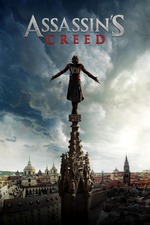 When Assassin's Creed was in the lead up to its release, it certainly seemed the film was primed to break the video game adaptation curse. Re-teaming Michael Fassbender and Marion Cotillard with director Justin Kurzel after the trio collaborated on 2015's Macbeth, it seemed a match made in heaven. One of the best films of 2015, Macbeth is so good that I loved it in spite of the stream having Chinese subtitles, which only worsened the fact that all of the characters had thick Scottish accents while spitting out Shakespearean English. It was hell, but a beautiful one at that. Assassin's Creed further establishes Kurzel as a brilliant visual director, but Assassin's Creed just seems to clunk along far too often and, as a result, its climax lacks the requisite power to make it all work together.

Based on the greatly popular video game series of the same name, Assassin's Creed introduces the concept of the Animus. Transporting its occupant to the past life of a direct ancestor, the device is being used by Sofia (Marion Cotillard) and her father Alan (Jeremy Irons). Attempting to find the Apple of Eden - in which the seeds of mankind's first disobedience were sown and where the key to controlling humanity's free-will is said to exist - the two find men and women with a link to a member of the Assassin's Creed, a group of assassins sworn to defend the Apple. By putting them into the Animus, the men and women experience events as seen and performed by their ancestors, which can lead to clues as to where the Apple is located. However, with Callum Lynch (Michael Fassbender), they have their best opportunity. A direct relative of an assassin named Aguilar who operated in 1492 during the Spanish inquisition, he was the last man known to have possessed the Apple of Eden. Now, it is up to Callum to find out where he hid the apple. However, with Alan working for the Templars - the group that orchestrated the Inquisition and still seeks to control humanity - Callum and the other assassins must try to use their knowledge of where the Apple is to try and prevent the Templar from being able to use it against humanity. In other words, this film is complex.

Where it falters the worst, however, is the scenes in the modern day. Compared to the exciting sequences in 1492 Spain, the scenes in the modern day suffer from being both too long and too rushed. Dialogue, especially what is written for Moussa (Michael K. Williams), is always clunky. There is just no common thread with how the dialogue is written, making it appear as though everybody is just talking past one another. Scenes are either too exposition heavy and, thus, drag or they are too short and never really explain what is going on. For example, when the inmates revolt against Sofia and Alan while Callum is in the Animus, it is unclear throughout the sequence what is happening with no moment where they seem to plan it all out together. Instead, they are shown to be trying to kill Callum only to then fall in line and take orders from him shortly after. Aside from a brief bridge scene with his father Joseph (Brendan Gleeson), there is no moment where we see them all decide to revolt and then work with Callum. It is very odd and shows how underwritten some parts of the film are, compared to how overwritten moments of exposition are.

Where the film's rushed nature really hurts it is in the climax of the film. With the Templars possessing the Apple immediately after Callum revealed where it was, the scene of them finding the Apple is about ten seconds long. The whole film is about them to finding the Apple and when they finally get their hands on the thing, the film opts to just rush through everything leaving the film itself feeling abrupt, only worsened by its ending that is equally rushed and left open for a sequel. With the Templars celebrating their success and the Assassins interrupting, the scene of Callum and Alan in their final moment together happens in two seconds and lacks any sense of power or presence. It just happens and everybody moves on without reacting to what they just witnessed. The abrupt ending immediately after only worsens this with the film lacking a satisfactory ending in the name of setting up a sequel.

Yet, Assassin's Creed nearly saves itself with the scenes in the Inquisition. Unique, engaging, and steeped in mythology, the scenes are absolutely excellent from a story perspective. Action-wise, the scenes feature the film's greatest fight choreography with an excellent usage of hand-to-hand combat, sword fighting, and improvisation with nearby elements on the set. Each fight scene is excellently staged and shows Kurzel's adeptness with battle scenes, as he had previously demonstrated in his sophomore film, Macbeth. Both films really crescendo with their gorgeous action sequences and the scenes in this film nearly make up for the lack of power and intrigue found in the moments set in the modern day. It is these moments that Assassin's Creed really excels as an action film, allowing it to entertain and thrill with great ease. Unfortunately, its commitment to telling its story in the modern day with the Inquisition sequences brief and far too intermittent, is what really leads to the film unraveling as a whole. If more, if not all, of the film was just Fassbender as Aguilar trying to secure the Apple of Eden and protect it from the Templar, the film would be far more interesting. Unfortunately, it remains focused on exploring Callum Lynch and the doctors trying to extract his memories. Between the two sides of the film, only one of them ends satisfactorily and makes complete sense. This, sadly, is not the portion given the most screentime.

Visually, Assassin's Creed is on-par with Macbeth, but only in the Inquisition scenes. While there are some nice shots during the Templar meeting at the end of the film, the rest of the modern day scenes are pretty drab with dull blue and white walls throughout the complex. While there is some nice usage of special effects in these scenes, they hardly make up for the otherwise bland look of the building. Where the film soars visually is in Spain with old school browns adorning the film. Using some great silhouettes set against the backdrop of the city and some excellently taken shots of the landscape, Kurzel makes the film's Spanish scenes into a visual feast for the eyes. Perhaps the peak comes when he indulges in his love of dust being blown across the horizon. Utilized heavily in Macbeth as well, the scenes of the desert sand blowing as the Assassins pursue the Prince of Granada after he is captured by Templar or as they try to overthrow the Templar influence in the country, really stand out as the best eye candy of the film. However, all of the scenes in the Spanish Inquisition really capture the eye with not just its explosive action scenes, but also in how the sequences are beautifully captured with practically poetic imagery unfolding on a consistent basis. While the modern scenes make heavier use of special effects, nothing found there is nearly as eye catching as the aforementioned shots in Spain.

Largely disappointing, Assassin's Creed is a film that pursued the wrong route. Had it stuck with being an adaptation set in the Spanish Inquisition, it would have been far more successful. Unfortunately, it settled for being a rather tame film about a group looking to take over the world. Ignoring how derivative that premise is, the film never really excels in becoming about world domination, instead rushing through seemingly key moments and lacking any sort of dramatic pay-off. Had it remained a historical film with the same premise, it clearly would have been far more successful given how tremendous the historically-set scenes are, especially compared to the modern ones. A misfire in his third directorial effort, Justin Kurzel may not continue his early career hot streak, but Assassin's Creed shows that, if nothing else, he is a master of creating stunning visuals.