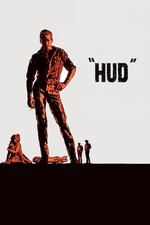 Martin Ritt’s Hud is one of those films engineered for me to love. With a firecracker of a script, an ensemble cast doing some of their best work, and a revisionist western style that examines the death the old west, Hud is a punch of a character study. Its titular character, Hud (Paul Newman), is the type of man with a perpetual chip on his shoulder. His conscience is full with guilt over the death of his brother, thus he lashes out. His father Homer (Melvyn Douglas) gets some of his ire, his nephew Lonnie (Brandon Dewilde) get hit with it, and the family’s housekeeper Alma (Patricia Neal) often gets his more aggressive attention. This is a man who is never content to just be upset on his own. Instead, he has to drag everyone down with him into the pit of despair and self-pity, all while embodying what is wrong with the country. He is a man who only seeks to help himself, screw everyone else, and get problems off his plate no matter how wide-reaching their effects. Upon the discovery that his father’s cattle may have foot and mouth disease, which would lead to the entirety of the cattle needing to be killed, Hud even suggests just selling them all even if it would mean causing a nationwide epidemic. This, in one scene, describes just who he is as a man.

As a character study, Hud is one of those films that airs all of its dirty laundry. It may hit it all right on the head a bit too much as every character just comes out and lets everyone know exactly how they are feeling, but with a cast this good, it is hard to care. Paul Newman as a charming antihero and chronic womanizer is a real highlight here, capturing all of his charm and showing why dangerous and self-depreciating can be cool in the right package. He is still contemptible, but his charisma allow the film to show why a young man like Lonnie would be nipping at his heels, desperate to become like him. Hud is the quintessential cool guy, all without morals, empathy, or backbone, all while he feels like the world owes him something for being so damn cool. One of the few who refuse to put up with him is Alma. Patricia Neal is absolutely phenomenal in this film, cutting every man down to size, ranting about the men in her life, and pushing back whenever Hud gets a little too handsy around her. It is no wonder she won Best Actress for this role, making full use of her 21 minutes. Melvyn Douglas as the grisled old rancher forced to watch his livelihood die right in front of his eyes is also a great turn, capturing the masculine posturing of a man so worn out by life as well as the raw emotion of realizing that what you have worked for your entire life is gone and will never come back due to the changing times.

In probing all of this, Hud has a firecracker of a script from Irving Ravetch and Harriet Frank Jr., making full use of the sharp delivery of everyone involved. In particular, Patricia Neal gets a handful of incredibly quotable lines as she rants about how all men are heels who are only useful to scratch an itch that cannot be scratched alone. As she uses double entendres to describe men as pigs or worse, her performance is not just fiery and charming but also packed with the old-school zip that so many modern films could have. She is on top of the ball, always ready to deliver a deadpan shot at the men who are constantly bothering her. Douglas is also given his fair share of great lines, namely as he speaks to Lonnie about how the, “look of the country changes based on the men we admire,” as he rants about Hud’s selfish behavior. As he stares into the distance and talks about his two longhorns - two of a dying breed, no less - and about how he had pride in his cattle but would not have pride in using his land for oil, Douglas not only nails the roles but the lines capture so much emotion from within the character that it is hard to not become somewhat entranced. From beginning to end, Hud is a film where the viewer hangs on every single word, for fear they may very well miss out on a line that is not just quotable but really points to what this whole situation is about.

As an examination of the changing times, Hud blends the old-school lifestyle of the Bannon family with the modern touches of the 1960s. Characters hang out in diners or Lon goes to the movies with Homer, all while Lon and Hud get into a bar fight after turning on a jukebox. This film is a product of its time undoubtedly, while also showcasing the changing times of the 1960s, similar to how John Huston’s The Misfits had done two years prior. As The Misfits used thoroughbreds, Hud uses longhorns and the soon-to-be empty corral that once held the entire legion of cattle owned by the Bannon’s. In the future are oil rigs undoubtedly, once the greedy and selfish Hud controls the ranch. Yet, for now, it is a place caught between time periods. The town has all of the then-modern touches on charms, a place that Hud often hangs out and tries to pick up married women. The ranch is cut right out of the past, representing all of the scale of the peak of the old west while having none of the fill. It is no wonder that Hud was praised upon release for Ritt’s ability to show space. This is especially true when outside, such as the final shot of the entirely empty corral. It is vast - just like the ranch - and yet there is nothing there. It is locked away in the past, forever to remain just a fragment of memory while the world steams over it in the name of some new oil rigs, a road, and further build-up.

With the country moving past the old west, it also finds young Lonnie at a crossroads. He cherishes stories of his deceased father running around chasing women with Hud before he died and Hud went to war. Chasing away Hud like a puppy and even being encouraged by him to both drink and picking up women, the pair even share a mutual love of Alma with both taking very different approaches to this. Lonnie is a young man who is more passive in love, preferring to know a girl’s personality before making a move. Hud is quick. If he wants you, he wants you and that is it. Lonnie is torn. Does he want to go on wild adventures with Hud or does he want to retain who he is? The fight for his soul is the fight for the country at-large - as shown by Homer’s aforementioned quote regarding the country going the way of the men we admire - and a decision he must make all on his own. With Homer may represent the past and Hud may represent the future, Lonnie finds himself having to figure out what he really wants out of life. Is the fleeting lifestyle of Hud is worth it to him where he will just try to get rich without the work or does he want to work like his grandfather? His final moments with Alma drive at this battle, as she urges him to “not get lazy” as she thrusts herself onto him with a massive bear hug. While named “Hud”, the film’s journey through the young life of Lonnie often makes it feel like a coming of age story. From the beginning, he hides away magazines with “peachy pin-ups” as Alma describes them like a teenage boy. By the end, he must decide to either make his way on his own or depend on others the rest of his life.

As a whole, Hud is incredibly cynical about the future, portraying Hud as the very embodiment of the new mentality as men seek to get rich by any means necessary while individual personality has come to mean very little, in business and in love. It is no surprise that Homer is rather unwilling to stick around here, as the only thing that gave him purpose is cruelly ripped away. As Hud says towards the end, “This world is so full of crap, a man's gonna get into it sooner or later whether he's careful or not.” It is a brutal sentiment, but one that echoes the fears of this film as a whole. This is a film that sees the bleak side of life, the way in which everything good will be squashed out, the way in which the commercialized and corporate life is setting into mainstream America, and the way in which family will step on one another’s throat if it means getting a little richer. It is a tragic film in this way, offering very little hope for Lonnie, especially since he wants to try to try out life on his own but will very likely find a harsh world waiting for him.

A harsh revisionist western with a quotable script, tremendous actors, and strong themes, Martin Ritt delivers yet again in both getting the most out of his great cast and in helming a film that feels every inch of its setting and probes the very nature of the old west lifestyle. It is a film with a lot of heart, emotion, and tragedy within its frame, capturing a very forlorn feeling throughout as it shows the very end of the old west as it occurs on this one ranch. Coming not gradually, but with a rapid series of bangs, Hud feels like a punch to the gut.