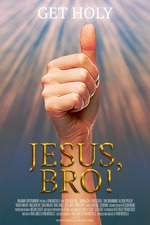 Jesus, Bro!, the new insufferable "parody" from Channel Awesome (specifically the Cinema Snob branch) is a flimsy, unfunny, snoozer of a movie that competes with high school student films in terms of overwhelming artifice and staleness, except for the fact that Jones and co. received 55,000 dollars to fund this lame ass thing.

Jesus, Bro is mostly a string of eye-roll worthy references and piss poor jokes, but it's also mixed with the fact that everything is incompetently put together, leading to a sensational feeling of boredom. A trend for every movie made by so called YouTube celebrities is that they're indiscriminately awful, lacking any and all skill to create something that isn't fan pandering wankery, this included with an entirely flaccid script. Admittedly this is less terrible than the AVGN movie and unwatchable That Guy With The Glasses ego boosters, but this is just sad. Even as a mild fan of Cinema Snob, I can't get past how awkward and flat everything is, it's lifeless for the vast majority of the runtime. Nobody except for Brad Jones and Fard Muhammad are likable, even the otherwise charming members of Midnight Screenings. Also I'm pretty sure it's been scientifically proven that Doug Walker is actually Satan incarnate.

The movie picks up, albeit briefly, when Jones comes in for a painfully small scene. Jones is such a charismatic guy and even in a movie as bad as this, he still lightens up the entire mood, tone, and feel that is empty any every other moment. Him aside, the constant barrage of sighs that should be laughs was proof enough to show that this failed on a fundamental level, it's not funny and it's certainly not a sign that movies from YouTubers are getting any less painful.

Ultimately, this lifeless jab at the nonsense of Pureflix flicks is no better than the material it's riffing off of. Just because they constantly break the fourth wall and wink to the audience (all the while re-purposing the Pureflix aesthetic) doesn't mean it's anything more than a waste of time and money.