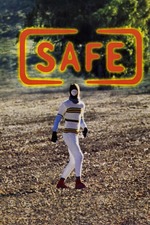 There's enough films about suburban ennui and cult like dependence that one might worry that Safe has the worry of losing its edge these days, but Haynes's details, perception, and god damn craft more or less trumps any of those individual films off the top of my head. Let's get the couple of questionable moments out of the way: I don't like Haynes in a comic mode. Safe works because his perceptions and intuition come from a very different mode of filmmaking, so when you get an obvious satire scene like the stepson reading his paper about LA violence or even the bit with the black couch, I can't help feel like he's hitting broad targets (leave that to Solondz, who I also like but feel registers in a very different mode with other outcomes).

So once Haynes decides he wants to be Kubrick (call it The San Fernando Overlook Valley), he goes into a whole different territory. With his extremely crafted long shots, stedicam tracks, and jarring edits (the TV screen color bars got a whispered "wow" from me), Haynes makes Safe into a god damn horror movie, but then smartly refuses to simplify it into "suburban life is oppressive." He instead takes it in a way more fascinating route to study how seemingly normal people can fall into the trap of any type of cult-like organization. Fascinating to watch Moore's face/body become more and more decrepit and ugly as she feels like she's embracing some sort of "freedom" of the mind (or "clearing" as they use). Safe actually investigates the operations of a cult—the psychology and mentality used to lure members in and make them dependent on their new homes. Of course, what makes this EVEN BETTER then, is this is all played in the background: no scenes of police investigating scams, money being transferred, or sinister wrong doings going on, but all from the point of view of someone convinced of it all (a stunning detail: the cabins in which anyone can see in at anytime and thus watch their behavior). When it comes to Moore's terrific speech at her birthday, her inability to articulate beyond the rhetoric that's been spilled into her mind says it all, and huge props to Moore for really registering that inarticulation. And of course he kills it with that ending, returning to Kubrick by recalling the death bed sequence of 2001, a woman who thinks she is in complete control of her life, because she has no control at all.

Side note: nice to see Edith Meeks in an early, somewhat throwaway role, who of course would go on to appear in two of Dan Sallitt's films.